Has Artificial Intelligence improved your finance department yet?

Finance has always utilized technology. From the humble abacus (2700 - 2300 BCE) to adding machines (1642 CE), to today's PCs.  The last 40 have seen even ‘Moore’ (excuse the pun, couldn’t resist) spectacular technological advancement, as discussed in our Tech for Execs: Ignorance is not bliss article. The questions we tackle here are what will the future bring, how disruptive will this change be for the finance department and what can we do today?

In short, AI refers to a device that perceives its environment and takes actions that maximize its chance of successfully achieving its goals. This definition is intentionally broad as AI could refer to a software application designed to perform bank reconciliations or Terminator robots. When we think about AI in terms of software, one guide is that the application can do things that it was not specifically programmed to do. It learns based on the outcome of previous events.

There are two categories of artificial intelligence:

Narrow AI is focused on one very specific topic. Still, in its early stages, we can already see developments in narrow AI. AlphaGo Zero is a computer program that taught itself the board game Go by playing against itself. Within days it was better than the best Go-playing applications which themselves beat the best human Go players. Then in 4 hours it taught itself Chess and could beat the best Chess programs in the world (the ones that beat the best humans). Finally, it taught itself Shogi (a Japanese version of Chess played on a bigger board) in 2 hours and was better than the world's best Shogi program.

Some other interesting examples:

General AI (sometimes called Artificial General Intelligence or AGI) is a hypothetical machine that exhibits behavior at least as skillful and flexible as humans across a broad set of topics. This is the Hollywood sci-fi that many people immediately think of.

Should AGI become a reality, it promises to change every aspect of our world fundamentally. Many experts in the field are in fact worried that it will lead to disaster. To learn more, I recommend an excellent Ted Talk by Sam Harris or Nick Bostram's great book on the topic.

What will AI (narrow or general) mean for the finance department?

In the near term, repetitive and time-consuming tasks are being automated at an accelerating pace driving massive improvements in efficiency. These advancements tend to be less risky and relatively low cost and thus are immediately appealing. The benefits are enormous, freeing your team from the mundane, repetitive work allowing them to tackle the difficult, often more rewarding tasks that they may not have time to tackle today.

As the technology improves, analyzing data and making decisions based on this analysis are also likely to be automated. We expect that the move to rely on AI for these most complex and difficult tasks - the ones that require years or decades of experience in humans - will be initially slow and cautious.

Nearly all studies suggest that the entire finance function (like many others) will be entirely automated by AI exclusively or a human-AI hybrid.

The process has begun. Recent research indicates 46% of CFOs in large companies already use narrow AI in some role in their organization and another 30% are investigating its use.

For decades finance departments leveraged spreadsheets and more recently databases. These technologies allow for simplistic automation such as calculations or manipulating manually defined groups of data. While basic, this automation has allowed finance departments to complete larger & more complicated tasks with fewer hours of investment.

RPA takes automation to the next level and can be considered a pre-cursor to AI. The three characteristics generally associated with RPA:
Some simplistic examples:

It's clear that technology has, does & will continue to influence the role of finance. While the exact timeline may be difficult to predict, the importance of continuously evaluating and embracing technology is indisputable. It is likely that many of the tools you use today include RPA functionality that is not being utilized. Further, you can expect to see a lot of narrow AI tools specifically targeted at finance in the very near future. Spending a bit of time to leverage these tools can provide your finance department with significant benefits at a very low cost.

For more on this topic(s), see: Finance Evolved 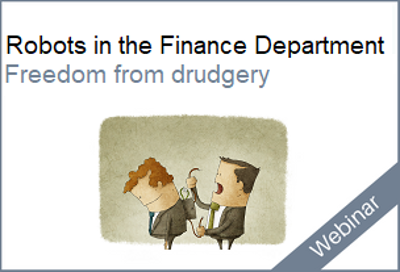 Why focusing on simple can lead to catastrophe