Answers to the 5 Big XBRL Questions

In Florida and California, XBRL is set to become a requirement for annual filing of your CAFR. If you are a finance officer in government, the term XBRL may be new to you. If you work in the finance department of a publicly traded corporation, you may have some familiarity with the term.

This article answers the 5 biggest questions about XBRL for those in finance that will be required to utilize it and for those who have been required to file in XBRL but may not know a lot about the technology.

eXtensible Business Reporting Language (XBRL)  was created by CPA Charlie Hoffman in 1998 as a way to transform business reporting.

Sometimes referred to as "bar-codes for reporting," XBRL allows the facts which appear in a report to be "tagged" with a name which is centrally defined and managed. Those facts and tags can then be used to represent the contents of financial statements or other kinds of compliance, performance and business reports.  In a typical finance department XBRL may be used to create, analyze and exchange financial reporting information including financial statements, general ledger information, and audit schedules. This allows XBRL encoded reports (called Instance documents)  to be machine-readable.

Inline XBRL (iXBRL) is a development designed to render the data in a visually appealing format. iXBRL takes the same data as an XBRL report and embeds it into an HTML document that can be viewed in a web browser. In other words, it is a way of tagging reports making them readable to both humans and machines.

Since 2006 XBRL International has operated as the not-for-profit organization to "develop specifications to support the collection, sharing and use of structured data for data reporting and analysis".

2) Where is it used/required ?

Today millions of XBRL documents are created annually in more than 50 countries and it is spreading into government in the United States:

Currently, government departments submit their financial reports in a somewhat ad-hoc way within stated guidelines (CAFR/PSAB/OCBOA). The ability to compare and analyze how varying governments operate is essential to good decision-making and community planning.  Aggregating and comparing the data from these reports from one organization to the next however can take countless hours. Even then, the flexible nature (professional judgement) of these reports can inhibit direct comparison.

To better aggregate on an comparable basis, some states/provinces have attempted to solve the challenge more locally by requiring submission of another report (SCO in California / AFR in Florida / MFIR in Alberta / FIR in Ontario/ LGDE in British Columbia ). These reports can be directly compared and analyzed, but require lots of manual work both by local government to populate and the state/province to aggregate and analyse.

This is what drives the requirement for financial information to be submitted in XBRL. It allows for standardized, apples-to-apples aggregation, analysis and comparisons by computers across multiple entities based on an industry-recognized standard.

Some government finance departments use report automation software that enables generating iXBRL tagged reports. If this is your finance department, that's good news, as preparing reports in iXBRL format may be as simple as assigning tags to your documents.

For those still using spreadsheets, XBRL will be more difficult and will involve engaging a 3rd party to do the tagging for you for a fee.  A 2018 study by the AICPA & XBRL US on small reporting companies (not governments):

Given the above numbers relate to small companies, we expect that fees for a government encoding a large, complex CAFR would be on the very high end of this range.


5) When should I start working on this?

The short answer is as soon as possible.

If the rate of successful compliance with the 2014 Data Act is any indication, you will need significant time to get prepared. Whether you are required to file in XBRL already or are preparing for the day it is required, the time to begin preparing is here:

For more on this topic(s), see: Automating Financial Reporting 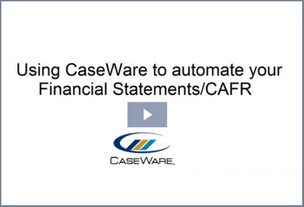 City of Iqaluit keeps calm and carries on